Eddie Hill does not deserve a life sentence! 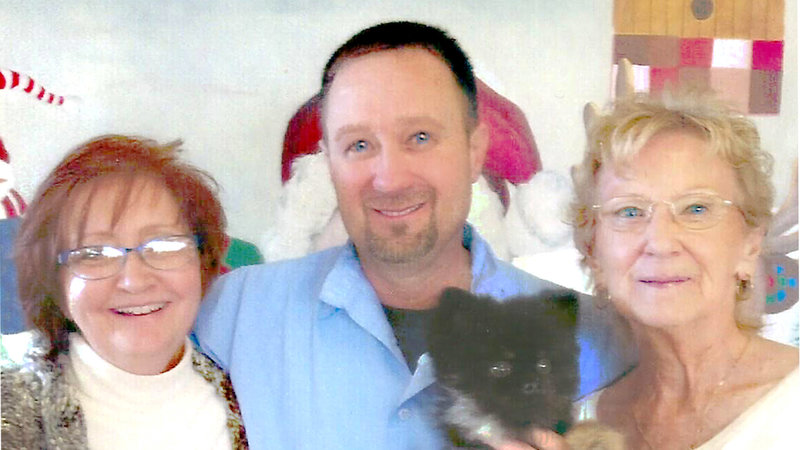 A CASE OF GROSS INJUSTICE  –  Eddie Hill did not kill anyone or want to kill anyone, yet he has served 27 years toward a life sentence in an Ohio prison and will first see the Parole Board in 2049 when he is 83 years old. The injustice of this was plain to Donald  “Duke” Palmer, the man who actually killed both victims for whom Eddie was sentenced. Unfortunately, “Duke” can’t talk. The State of Ohio executed him in 2012 for these very crimes.

But Duke Palmer’s words live on, in the form of a deathbed confession that he prepared and notarized prior to his execution. In it, Duke declared that Eddie Hill is the third victim in the crimes that Duke committed – a victim of injustice. (See his  Declaration here: http://email9869.wix.com/declaration) Following his own trial and resulting death sentence, Duke had agreed to testify in Eddie Hill’s behalf at Hill’s jury trial in 1989 – even meeting with Eddie’s lawyers regarding his testimony. Instead, Duke had a change of heart, followed the legal advice of his appellate lawyers, and refused to testify on 5th Amendment grounds as Eddie’s witness. Without Duke’s exculpating testimony, and with clear evidence that Eddie had been with Duke before and after the killings, the jury was satisfied with the suspicious circumstantial evidence that Eddie must have been involved with the killings.

As Duke’s death penalty appeals languished, he left Eddie “hanging out to dry” for 23 years. Still hoping for a new trial, Duke was not going to run the risk of hamstringing the possibilities of escaping his death sentence or even freedom by making admissions that would help Eddie but could be used against him; he knew he could not clear Eddie without dooming his own chances. When Duke’s execution date was finally scheduled, he finally presented the testimony which he had withheld from the jurors at Eddie’s trial – Eddie was completely uninvolved in the double killings until after Palmer shot and killed both men. Eddie’s only guilt related to following the after-the-fact orders of a crazy man with a gun in helping to move one of the victim’s bodies and helping to dispose of some evidence.

On the heels of Duke Palmer’s execution and with the benefit of Duke’s notarized statement exonerating Eddie from actual participation in the killings, Columbus, Ohio, attorney, Barry Wilford, applied for clemency in 2012. Incredibly, the Ohio Parole Board recommended against clemency, and Governor John Kasich denied the application in March, 2014. Wilford has announced his intention to file another application for clemency in Eddie’s behalf in April, 2016. “The interests of justice demand that this miscarriage be corrected,” Wilford stated, “and that Eddie Hill be released from a life sentence which he did not earn or deserve.” In Wilford’s words, Eddie Hill “was just a patsy and a victim.” As for Duke Palmer, Wilford says that “he was a coward who waited until the last moment to do the right thing in an effort to save his soul.”

MEET EDDIE HILL  –  Eddie was 15 when he first met Duke Palmer through his older sister, Cammy. Eddie and Duke were the same age and they became fast friends, going fishing, camping, swimming, etc. Then in 1983, their senior year in high school, Duke and Cammy were married, had two children, and Eddie spent a lot of time with the family. A couple of years later, they divorced, and Eddie lost track of Duke for several years.

In 1989, when Eddie was 23 and living in Columbus with his sister and her kids, Duke popped up, but he wasn’t the same Duke. He had become addicted to alcohol and cocaine. This re-acquaintance with him led to a disastrous outcome which has resulted in Eddie spending the past 27 years of his life in prison, with little hope of ever being released, as detailed above.

In spite of this, Eddie, now 50, has done well even in prison. He leads a clean and decent life, staying well out of trouble, and he is respected by staff and inmates alike. He has become an accomplished musician and musical teacher, whose band is continually picked to play for staff and inmate functions at the prison for nearly 25 years, and he’s the president of the music program.

What is even more amazing is that Eddie has become one of the most gifted dog trainers that  Karen Shirk and Jeremy Dulebohn have ever seen! They are the founding director and training director respectively, of  4Paws for Ability, an international non-profit dog training organization for the handicapped. “We’d hire him tomorrow,” Shirk says. “Our policy is not to hire felons, but for Eddie we keep writing to the parole board and the governor. He is something special.”(1)

In 2002, when 4Paws brought in dogs for training, Eddie signed up. He was given custody of Timber, a German shepherd mix who had suffered severe neglect. Someone had put a collar on him and never widened it as he  grew from puppyhood, causing the skin and fur to just grow around it and it had to be cut away. “His neck was a mess,” says Eddie, awed that he’d been entrusted to heal him. Timber would be with Eddie night and day, even sleeping in his cell. (2)

As Eddie moved into empathic attunement with the dog, elements of training fell into place naturally, like respecting the dog’s needs and remaining calm, kind, attentive, and patient. “It doesn’t matter what you’re going through personally,” Eddie says, “you have to keep your cool because somebody is there depending on you.” (3)  Eddie has been with 4Paws for 14 years now and has moved on to doing advanced service training, such as teaching dogs to turn on lights and open doors.

Prison wardens and guards privately consult with him about their own pets.(4) Eddie has kept a detailed journal of his dogs. “Timber, and every dog since, has given me back everything I’ve put into them tenfold,” he says. “I wish I’d known about this before I ended up in here. If I ever get out, it’s what I want to do, but I’m not up for parole until 2049.”  Eddie will be 83 in 2049.(5)

Eddie is a man who made a mistake when he was young and he has already paid with a large part of his life. Is this really a case of someone who should never be set free? We believe that he deserves a second chance.

Please sign the petition calling on Gov. Kasich to intervene. Edward Hill did not kill anyone!  Eddie’s Petition

Learn more about Eddie Hill   – (1-5) “Meet the Prisoner With a Gift for Healing Dogs – Sixty dogs changed one man’s life as much as he changed theirs.” by Melissa Fay Greene -Reader’s Digest Magazine, March 2014 – http://www.rd.com/true-stories/inspiring/prisoner-gift-wonder-dog/