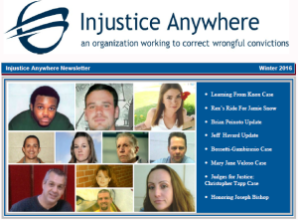 I am pleased to announce that the 2016 Injustice Anywhere Winter Newsletter is now available for online viewing and download. Injustice Anywhere (an organization I help operate) actively works to  bring more attention to wrongful convictions. We were highly encouraged by the increased number of exonerations seen in 2015, and we are hopeful the trend will continue its upward swing.

According to the National Registry of Exonerations, 2015 was a record year for correcting wrongful convictions. The registry recorded 149 exonerations in the United States, which broke the previous year’s record of 125. Fifty four of the exonerees on the 2015 list were wrongfully convicted of murder. Disturbingly, five of those exonerees were on death row.

These numbers show that we are on the right track, but we have a long way to go. We need to correct the mistakes we have made, and we also need to do the crucial work of reforming the system which allowed those mistakes to occur in the first place. If we fail to enact reform, we will continue to send innocent people to prison, which is unacceptable for any nation that expects to be viewed as civilized.

Injustice Anywhere had a productive year in 2015. Our main website injusticeanywhere.org received a major overhaul, making it more efficient and user friendly. We moved our radio show from Blogtalkradio to Spreaker, which opened the door to a wider listening audience. And we worked to relaunch the website you are visiting right now, which allows us to continue publishing informative articles on a news platform recognized by Google News.

Injustice Anywhere was thrilled to see positive results for three of our featured cases in 2015. Amanda Knox and Raffaele Sollecito were exonerated in Italy, Debra Milke was exonerated in Arizona, and Russ Faria was exonerated in Missouri. We also had our eye on several other cases throughout the year, including Barry Beach and the Fairbanks Four. We did radio shows on both of those cases and we were happy to see them finally end in freedom.

Sadly, the wrongful conviction problem is far more pervasive than most people realize, and even with increased interest in wrongful convictions over the past few years, most cases continue to lack the attention they warrant. These cases go far beyond the few our organization is able to feature and endorse.

Please download our 2016 Winter Newsletter to learn more about Injustice Anywhere. If you like what we stand for, we encourage you to get involved. Many innocent people continue to suffer in prison. They need others to be their voice. You have the power to give them a voice. You can make a difference. Please join us in the fight to free the innocent.