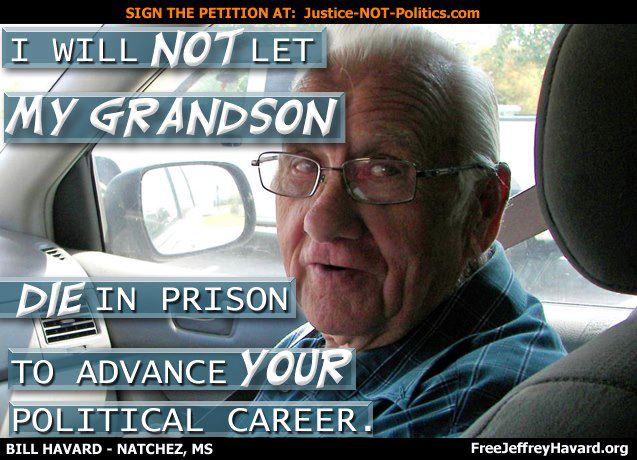 William G. Havard passed away this morning at the age of 84, in Nathez Mississippi. Friends and family knew him as Billy. Today his family and friends mourn his death, and no doubt try to bring comfort and support to Billy’s wife Ruby. The two would have celebrated their 66th wedding anniversary this coming Saturday.

Billy spent his last 13 years on earth defending and supporting his grandson Jeff Havard, who currently sits wrongfully convicted on death row in Mississippi. Even in their later years, Billy and Ruby were determined to make the 2 ½ hour drive to Mississippi State Penitentiary to visit Jeff, and had most recently made the trek this past Tuesday. Billy fell ill shortly after the visit and was admitted to the hospital the next day. That visit would be the last time that Jeff would see his grandfather. The separation of steel and glass has never been able to impede the love that Jeff and his grandparents have for each other.

Jeff’s relationship with his grandparents has been a special one. Jeff went to live with Billy and Ruby when he was 13-years-old, spending his crucial teen years gaining positive influence from two people that he cherishes.

Jeff is fortunate to have the support of his family. His mother Cheryl and his sister Paige have advocated strongly for Jeff just as Billy and Ruby have. Sadly, Jeff is not with his family now. Jeff is forced to mourn this devastating loss all alone in a cage. He will not be kneeling down and praying for his grandfather at his wake, he will not be attending funeral services, and he will not be hugging his grandmother to help bring her comfort and express his gratitude for all that she has done for him.

These crucial moments of life have been stolen from Jeff by the state of Mississippi. Losses like this garner little public sympathy for the guilty in prison, but what if you are trapped in a system that refuses to admit that you are innocent?

Jeff Havard was convicted of a crime that never happened. The charges against Jeff are disturbing but have no merit. Jeff’s conviction was secured on the false premise that he sexually assaulted his girlfriend’s infant daughter Chloe, which resulted in the infant’s death. The truth is the infant slipped from Jeff’s arms while lifting her from the tub, causing her head to hit the nearby toilet. The blunt force trauma caused a fatal brain hemorrhage. The death was an accident, not a murder.

The prosecution argued that Chloe’s cause of death was Shaken Baby Syndrome (SBS), and the manner of death was a homicide that resulted from a sexual assault. The prosecution’s case was built primarily on the testimony provided by Dr. Steven Hayne and the ER staff that was present on the night Chloe died.

Dr. Steven Hayne conducted the autopsy on Chloe Britt. Dr. Hayne did not find evidence of sexual assault while conducting the autopsy, even though he was told to look for it.

Hayne clarified in a 2014 affidavit that he specifically told prosecutors on more than one occasion prior to trial that he could not support a finding a sexual abuse. This information was withheld from the defense, which is a Brady violation.

Most shockingly, the defense learned in January of 2014, 12 years after the conviction, that Hayne had looked at tissue sections under a microscope and found definitively that there was no evidence of sexual assault. In a case where suspicion of sexual assault only arose when ER doctors and nurses noticed what they believed to be physical evidence of sexual abuse. Hayne’s microscopic findings were clearly exculpatory, and would have positively shown that the doctors and nurses had simply misinterpreted what they saw. The state withheld this evidence from the defense as well and failed to tell the doctors and nurses about it before they testified.

Unbelievably, the State chose to ignore Hayne’s findings and prosecute Jeff for murder during the course of a sexual assault.

Prosecutors stood before the Court and told the jury that Dr. Hayne had “confirmed the nurses and doctors worst fear, that this child had been sexually abused.” They knew that Dr. Hayne had done no such thing; in fact, he had done just the opposite. The prosecution carefully crafted questions for Hayne at trial, making sure to never ask him if a sexual assault had occurred. Jeff’s defense was led to believe that Hayne had confirmed that an assault had taken place, so they were in no position to bring up the topic on cross examination. Jeff Havard is on death row because the prosecution lied to the jury.

There is new evidence to show that Chloe’s death may have resulted from a preexisting subdural hemorrhage resulting from a traumatic birth. This preexisting medical condition left Chloe vulnerable to illness or injury from a minor impact.

There is also new evidence regarding Shaken Baby Syndrome that was not available at the time of Jeff’s trial. Cases of subdural hemorrhage and injury from short falls have been notably misdiagnosed as SBS in past cases. Multiple experts have now reviewed Jeff’s case that have concluded that Chloe’s death was not the result of violent shaking.

This extensive new expert evidence along with the new revelation of Brady violations, completely crumbles the case against Jeff Havard. Based on this new compelling evidence, Jeff’s defense team has filed new motions for relief. Attorney Jennifer Fitzgerald explains the current legal status of Jeff’s case on FreeJeffreyHavard.org.

Billy Havard’s death is a stark reminder that wrongful convictions cause irreparable damage. It is time for Mississippi to correct the injustice committed against Jeff Havard. He must not be left to suffer more loss in the future simply because the State refuses to admit that they made a mistake.