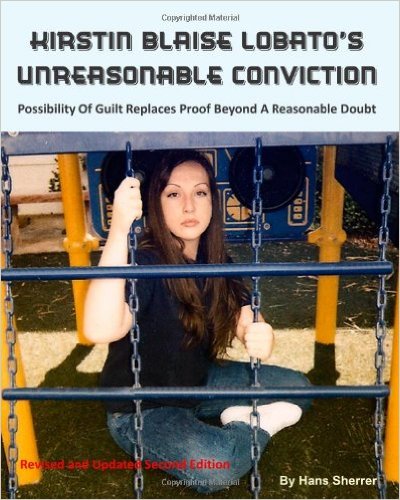 Kirstin “Blaise” Lobato was convicted in October, 2006, of voluntary manslaughter and sexual penetration of a corpse, in Las Vegas, Nevada. Her supporters will tell you that Kirstin is 100% innocent, and that police negligence led to a wrongful conviction. When looking at the facts of the case, it is clear that people should take notice. There is absolutely no evidence implicating Kirstin to the crime and she has a rock solid alibi.

Hans Sherrer, publisher of Justice Denied Magazine, has done extensive research on the Lobato case, and has written a book along several revised editions, all in support of Lobato’s innocence. His latest book titled: “Kirstin Blaise Lobato’s Unreasonable Conviction Revised and Updated Third Edition: Possibility Of Guilt Replaces Proof Beyond A Reasonable Doubt”, is now available on Amazon.com. Sherrer also offers the book online as a free download.

Sherrer offers a synopsis of his book on his website: “18-year-old Kirstin Blaise Lobato was at her parents’ house in Panaca, Nevada, 170 miles north of Las Vegas, the entire day of July 8, 2001. On July 8 a homeless man was murdered in Las Vegas. Ms. Lobato had never met the man, nor had she ever been to the Las Vegas bank where he was murdered.

First-degree murder charges were filed against Ms. Lobato without any evidence connecting her to the victim or the crime scene. After her first-degree murder conviction in May 2002 was overturned based on errors by the trial judge, she was retried and convicted in October 2006 of voluntary manslaughter and other charges related to the man’s death. She was sentenced to a maximum of 35 years in prison.

How could she be convicted when the prosecution is required to prove a defendant’s guilt beyond a reasonable doubt?  This book explains that in the U.S. today the prosecution’s speculation it is “possible” a person committed a crime is enough for that person to be found guilty and imprisoned for decades.”

Please visit justicedenied.org to learn more about Hans Sherrer’s latest book. And while you are there, be sure to download the latest issue of Justice Denied Magazine.