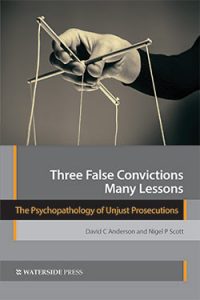 While the vast majority of the public is aware that innocent people do end up in prison, most of us do not know the path that leads those poor people into such a terrible situation.  In their book “Three False Convictions Many Lessons“, Anderson and Scott outline succinctly how and why the most vulnerable amongst us are easily forced into false confessions.  But they go beyond the “Reid Technique” and other police tactics used against people that authorities believe “might” be guilty of a crime.  It delves into the psychopathy of the personalities drawn to powerful positions within a given police force, or any other form of power over the public, to illustrate that such people truly know how to work the system and see vulnerable people as objects to further their careers.  Or even as prey.

The poignant stories of Darlie Router, Stefan Kiszko, Amanda Knox and Raffaele Sollecito are examples of how police twisted facts to suit their own agendas, utterly ignoring the evidence and cementing that confirmation bias is a real threat to public safety.  In each case one or more of the authorizes in charge pushed their “agenda” despite clear evidence to the contrary.  These cases are not isolated phenomena and there are thousands of people in prison to prove it, hence the creation and success of entities like the Innocence Project.

The beauty of this book is that it also highlights three cases of wrongful convictions from three countries, the United Kingdom, the United States and Italy, proving that injustice happens everywhere.  The sad part is that all three of the countries represented are First World and so we cannot simply blame a corrupt police force on a substandard government.

The reality is that Constitutional Negative Empathy (CNE) exist at all levels and in all walks of life in all societies.  CNE is the term coined by the authors to be less “pejorative” toward what we commonly refer to as “psychopaths” and “sociopath” so that the public can sympathize with this illness as we would toward all mental or physical illnesses as something to be recognized, treated and maintained. Just as we do with diabetes, heart disease or schizophrenia.

I highly recommend this book for the public, but I also think that it would greatly benefit those in law enforcement.  Each of us are in contact with several CNE’s daily, though we might not recognize them as such, workplace bullying is only one example, so each of us can benefit from the knowledge contained in these pages.  But law enforcement authorities would do well to pay close attention to removal, or control, of CNE’s in a position of power for not only the benefit and integrity of a given police force, but also public safety.

Recognition and control of CNE’s could well be a practical start to reducing wrongful convictions everywhere.