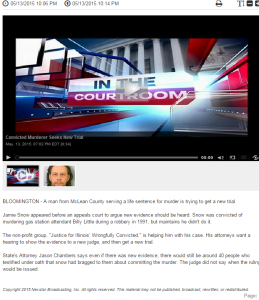 Jamie Snow supporters were made aware this week that Mclean County State’s Attorney Jason Chambers has yet again given a blatantly false statement concerning the Jamie Snow case. This is the second time that he has disseminated this lie in a public forum. Supporters have been left with no choice but to ask for a public retraction. A letter was sent to Jason Chambers today asking for a retraction (see below).

Jamie Snow was convicted in 2001 for the 1991 murder of William Little, a gas station attendant in Bloomington, Illinois. Jamie is currently serving a life sentence without the possibility of parole.

Jamie Snow has proclaimed his innocence from day one. In the years following his conviction, new information has come to light suggesting that police misconduct and bad lawyering sent the wrong man to prison for William Little’s murder.

An appeal for Snow was heard on Tuesday May 12,  by the Fourth District Appellate Court, in Springfield, IL. Several issues are under review. It was news of this appeal that sparked erroneous comments once again from Jason Chambers.

Injustice Anywhere, an organization I am a part of, is deeply concerned by the blatant falsehoods put forward by Jason Chambers regarding the Jamie Snow case. Releasing misinformation in an obvious attempt to sway public opinion is incredibly telling, and has ramifications reaching far beyond the Snow case. Why would a State’s Attorney feel the need to lie to the public about a case he claims to have confidence in? Shouldn’t the truth be enough?

Wrongful convictions have now become a mainstream topic as exonerations continue to flood the news cycle. The actions of those like Jason Chambers to circle the wagons in an attempt to protect the prosecution’s office at all costs should now be viewed throughout the system as antiquated tactics. Errors of the past must not be glossed over. We are dealing with people’s lives. When errors occur, they need to be corrected. When misconduct occurs, people need to be held accountable.

Jason Chambers has shown a disturbing lack of integrity and he has violated the Illinois Rules of Professional Conduct. Injustice Anywhere stands with Jamie Snow’s supporters and fully supports their demand for a public retraction of the false public statements made by Jason Chambers. His comments must not be allowed to stand. The citizens of McLean County deserve honesty and integrity from their State’s Attorney.

Here is the letter sent to Jason Chambers today by Jamie Snow’s supporters:

In a WMBD story published May 13, 2015 at: http://www.centralillinoisproud.com/story/d/story/convicted-murderer-seeks-new-trial/37624/b10eRV3HM0OLfGLdrU7Dzw, you were quoted:

“State’s Attorney Jason Chambers says even if there was new evidence, there would still be around 40 people who testified under oath that Snow had bragged to them about committing the murder.”

This statement is patently, objectively false. The state only called 41 people to testify in any capacity at trial, certainly you know this. So are you asserting that Jamie confessed to every single witness the state called at the time of trial except for one?

Similar to disinformation provided to original Snow jury members, you purposely concealed that of the 41 state witnesses who testified at Snow’s trial under oath:

The truth of the matter is that there were 11 witnesses who swore under oath that Jamie “confessed” or implicated himself somehow. Not 40, 11. And what you fail to acknowledge is that the entire purpose of Jamie’s current petition, the new evidence that you are glossing over, is evidence that many of these 11 (not 40) witnesses lied. Jamie never confessed to them.

Eleven (not 40) jailhouse informants which include several alcoholics, a convicted sex offender, prisoners desperate for shortened terms, parolees, paid informants and complete strangers –  testified that Jamie Snow “confessed” to them, or implicated him in some way.

Mr. Chambers, you selectively ignore multiple sworn witness recantations and affidavits noting tremendous pressure from the Bloomington Police Department. Witnesses were told exactly what to say on the stand and were provided with details that contradicted their initial interviews. Mothers were threatened with the loss of their children. $7,500 in reward money is yet to be accounted for. The very young victim’s mother was even provided with witness phone numbers to add additional pressure.

You ignore the fact that the newest affidavit states that not only did a witness know he was lying, so did the prosecution. You ignore the approximate 17 affidavits submitted by witnesses in which they recant or change their testimonies. And you continue to ignore the remaining numerous pieces of new evidence before the court comprised of critical state’s evidence that was never disclosed to Snow before trial, was never heard by the jury, and was obtained only through Freedom of Information Act requests.

Instead, you choose to make blatant false statements to the press, use McLean County tax dollars to continue to fight appeals, and refuse to perform DNA testing (paid for by the Exoneration Project) that could confirm Snow’s conviction or exonerate him.

Unfortunately, this is not the first instance wherein you, Mr. Chambers, have made false public statements concerning this matter. On March 28, 2014 you made a similar comment on a “VoteJasonChambers” Youtube.com video.

A FOIA was filed on 4/22/14 requesting the names and contact information of “over 40 different people” Snow “bragged about the killing or implicated himself” to, etc. On 4/29/14 Rosalee Dodson, Esq., Asst. Corporation Counsel for the City of Bloomington denied that request in full.

Still, McLean County’s top law enforcement official continues to lie to the press. Maintaining the status quo of your ethically challenged predecessors, you have crossed boundaries set forth in the Illinois Rules of Professional Conduct. We have posted the relevant rules at the end of this letter for your review.

The State has unfettered access to every detail regarding witnesses who previously claimed Jamie Snow “confessed,” yet continues to publicly disseminate blatant falsehoods with reckless regard for the truth. We overlooked the last instance, but are now forced to demand a public retraction in an attempt to end this libelous and inflammatory abuse of public office.

(a) A lawyer who is participating or has participated in the investigation or litigation of a matter shall not make an extrajudicial statement that a reasonable person would expect to be disseminated by means of public communication if the lawyer knows or reasonably should know that it would pose a serious and imminent threat to the fairness of an adjudicative proceeding.

RULE 3.8 Special Responsibilities of a Prosecutor

(d) In addition to his or her obligations under Rule 3.6, a public prosecutor or other government lawyer in criminal litigation shall exercise reasonable care to prevent investigators, law enforcement personnel, employees or other persons assisting or associated with the prosecutor in a criminal case from making an extrajudicial statement that the public prosecutor or other government lawyer would be forbidden from making under Rule 3.6.

(e) The prosecutor in a criminal case shall refrain from making extrajudicial comments that would pose a serious and imminent threat of heightening public condemnation of the accused, except for statements that are necessary to inform the public of the nature and extent of the prosecutor’s action and that serve a legitimate law enforcement purpose.”

In 1935, the United States Supreme Court described the duty of a federal prosecutor in the following passage: