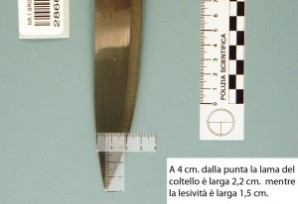 Continuing our look at the positive indications that Amanda Knox was intentionally framed by the Italian police from the very earliest days of the investigation into the murder of Meredith Kercher, we can turn to the manufacture of evidence as a clear indication on the part of the Italian police and prosecution, in framing Amanda Knox and Raffaele Sollecito.

The key piece of evidence to emerge in the earliest days, acquired the morning of the arrests on Novemnber 6th, 2007, is the famed “double knife”. It was plucked from a kitchen drawer at Raffaelle Sollecito’s apartment, because it looked suspicious, according to the police officer who choose it.

We are fortunate to have Sollecito’s first hand account of the incident, from his book, “Honor Bound”. Describing the incident;

” ..Then I watched them pull the place apart. In the kitchen, where I was standing, they went through the trash and sniffed through the cleaning products. When Finzi (police officer Armando Finzi) came across a drawer full of kitchen knives, he called Chiacchiera (senior officer and head of the Squadro Mobile’s organized crime team) over immediately. He pulled out the first knife that came to hand, a large chopping knife with an eight inch blade. ‘Will this knife do?’, Finzi asked Chiacchierra. ‘Yes, yes, it’s great,’ came the answer.”

The police officer Finzi, also stated in court that he had nothing other to go on in selecting the knife but his own “investigative intuition”. When the Knife was tested by the lab technician Patrizia Stefanoni, the reported results came back with the famous finding of Amanda’s DNA on the handle, and Meredith’s DNA on the blade.

However, Stefanoni has never shared the underlying DNA data essential in determining the validity of her lab work. We can glean some insight as to how much of Meredith’s DNA was on the knife, by turning to the very detailed analysis of Dr. Mark Waterbury, PHD, in his book on the case entitled, “The Monster of Perugia; The Framing of Amanda Knox”.

After pointing out that the knife from Sollecito’s kitchen was too large for all but one of the few knife wounds, and that the knife was incompatible with the outline of the murder weapon in blood left on the bed sheet by the actual killer, and pointing out the location as being separate and far away from the scene of the murder, Dr Waterbury offer his opinion as to how much of Meredith’s DNA was on the blade of the ‘double knife’.

Dr, Waterbury writes; “All of this gives us a solid basis to arive at an estimate of the amount of DNA that was present on the blade of Raffaele’s kitchen knife. None. There was no DNA on that knife. The polizia could have pulled the knife out of a bath of sulfuric acid and the profile tests would have come out the same. The DNA in the profile came from Stefanoni’s laboratory, or, possibly, the extremely clumsy handling and shipping, it did not originate from the knife.”

Dr Waterbury explains the results obtained are most likely from errors in the lab, that follow from the low amount of DNA tested, the fact that only a single test was run when at least two are required to validate the results, the fact that Stefanoni over-rode the machine controls when the sample tested as being too low in quantity – meaning the equipment could not identify that a measurable sample actually even existed, and that the presence of Meredith Kercher’s DNA had been run extensively through the same equipment just days earlier.

The question for our purposes, is whether Stefanoni is incompetent, or does she rely on sloppy procedures, in combination with concealment of her underlying DNA data, to intentionally induce false results from contamination, while claiming her results to be the product of legitimate analysis?

For insight, let us recall a previous incident that occurred just two days before Finzi’s intuition led the police to the ‘double knife’.

In Amanda Knox’s book, “Waiting To Be Heard”, we have an account of the police taking her and the two Italian girl flatmates back to the cottage, on the afternoon of November 4th, 2007. From Amanda’s account, after checking her room again to see if anything was missing, the police asked Knox to come back into the kitchen. The police present asked her, “open the bottom drawer, do you see anything missing? “.

Knox explains; ” This is where we kept our overflow utensils, the ones we almost never needed. When I pulled open the drawer, stainless steel gleamed up at me. ‘I don’t know if there’s one missing or not’, I said, trembling. ‘We don’t really use these’. ”

Knox continuing; “I reached in, pushed a few knives around, and then stood up helplessly. I knew the assortment in the drawer might include the murder weapon – that they were asking me to pick out what might have been used to slash Meredith’s throat. Panic engulfed me. I don’t know how long I stood there, arms limp at my sides. I started crying. Someone led me to a couch. ‘Do you need a doctor?’ the interpreter asked.”

If Amanda Knox had pulled out a knife from the drawer, compatible with the fatal wound on Meredith Kercher as any sharp object would be – including a shard of glass, wouldn’t we expect that such a knife, “would also do”?

Had Amanda grasped a knife then from her kitchen, the police would have had no need to go to Sollecito’s kitchen for another, for they’d have gotten what they needed.

There is no innocent explanation for the police asking Amanda Knox to reach into the kitchen draw and select a knife that would be ‘compatible with the murder weapon’. It is a clear indication of an intent to frame Amanda Knox on the afternoon of November 4th, 2007, by trying to get her hands on an item unrelated to the crime, yet which which could be manufactured into a piece of condemning evidence.

Far beyond being a ‘witness’ at this stage, Knox also wasn’t just a suspect – she was both prey and victim.