This is a short presentation of new evidence found proving Prosecutor Mignini’s railroad job against Amanda Knox was truly premeditated.

Last week, Andrea Vogt was highlighted as propagating more lies about Amanda Knox in an article by Bruce Fisher.

Apparently, Andrea Vogt who strongly supports Prosecutor Giuliano Mignini is starting to use his intimidation tactics to quiet her critics. 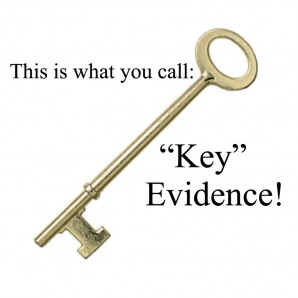 To avoid redundancy, if you need any background in the Amanda Knox case, please see DENVER or the revised chronicle on Wikipedia: http://en.wikipedia.org/wiki/Amanda_knox

I recently read an outstanding article by one of my personal heroes, Bruce Fischer.  The next day I went to reference the article to find it had been removed.  I found it reposted on another reputable site only to see it removed again within a day.

So as I can only speculate, but I am guessing that the Media Mafia are gaining power to suppress our First Amendment rights to publish the truth about Amanda and Raffaele.

Fortunately, Bruce Fischer cannot be so easily intimidated.  He slightly amended the article and reposted it on GroundReport:

So at the risk of being threatened by the Media Mafia, I’d like to highlight more of the irony that I see in Bruce’s article.

Bruce clearly points out that an Italian lawyer is trying to clear his name from Mignini’s madness by having a case reopened.  The incredible genius of Andrea Vogt interpreted the reopening of the case as a roaring endorsement by the court of Mignini’s original satanic hypothesis.  *Ridiculous*

But what I would like to point out to Miss Vogt is her illogical, logic of guilt about Amanda that’s in the same article.

Miss Vogt clearly points out what she perceives as a contradiction in Amanda’s account of  her physical location in the flat when the police kicked Meredith’s door open.

Vogt: “In the letter, she says she and Raffaele were in the kitchen when Meredith’s door was broken down, but her description in chapter six of memoir makes no reference to being in the kitchen.”

Miss Vogt, may I  point out that Amanda was under the authority of the police!  She was standing exactly wherever the police told her to stand!

Amanda was obviously scared, confused, and discombobulated, so you want to send her to prison for twenty-six years because of her recollection of where the police told her to stand?  I don’t know about any journalism awards, but you certainly don’t deserve the Humanitarian of the Year award!

Miss Vogt, let’s look at more facts as presented by the prosecution that you find to be infallible.

Mignini’s assassins (oops, I mean investigators) said Meredith’s door had been locked from the inside and pulled closed.

You said Amanda contradicted herself about looking through the key-hole.

If Amanda could see through the key hole, it means two things:

1. It is a 19th century style lock that uses a skeleton key.

2. The key could NOT have been in the lock for Amanda to have seen through it.

When you have a double sided lock (it can be locked or unlocked from both sides), it is best advised to have at least two keys.

You leave one on your key chain for when you leave and want it locked.

You leave one inside the room for at night if you want to lock the door from intruders (like Rudy).

When you lock it at night, you leave the key in the door in case of fire. (This rule has been around for over two hundred years, it’s common sense).

So if Meredith’s keys were found inside the room, but obviously not in the door, Rudy obviously took the spare key and locked the door behind himself.

So Miss Vogt, thanks to your asinine assertion of Amanda’s contrived lies, I inadvertently came across more compelling evidence that Mignini and his thugs made up lies to protect Rudy Guede at Amanda’s expense.

As I just outlined, the double sided dead-bolt lock was locked from the outside, not the inside.

But the police reported that:

“Her bedroom was locked from the inside, the door then pulled closed…”

So I was intrigued by this illogic.

First, what landlord would put a lock on the bedroom door that could accidentally lock a person out of their bedroom?

So I found a photo of the actual lock from the crime scene to find that for sure it is a new, retro style, double sided, skeleton keyed, dead bolt lock. 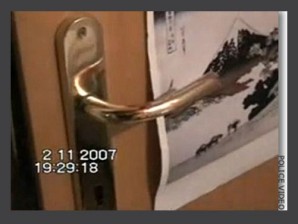 This is a safety lock that needs a key from the outside or the inside as outlined above.  There are NOT two locking mechanisms built into this unit.

(An inspection of the original lock in this picture will substantiate that fact!)

So what possible motive would Mignini have to make up such a trivial lie?

How about the fact he knew that neither Amanda nor Raffaele had the key, Mignini was framing them in the first place.  Note: If he was truly suspicious of Amanda and Raffaele, he would have had his detectives looking for the key, not hiding the fact that is was missing.

So that only leaves Rudy Guede that could be in possession of the key.

This is still in the first few days after Meredith’s murder, so Mignini had not yet been able to establish a reliable communication link with Rudy hanging out in Germany.  Mignini could not tell Rudy to toss away the key.

Nor could Mignini take a chance that Rudy would do something stupid and be picked up by the Germany police with Meredith’s bedroom key in his pocket.

Rudy is just stupid enough that he may have been holding onto the Brass Skelton Key as a memento, plus, it was shiny Brass! (Oh boy!)

So just in case of a worse case scenario, being the sly fox that Mignini is, he said  the door was locked with a finger latch from the inside, no key needed, no need to be looking for someone with a brass key!  Mignini’s pretty smart for an old feller!

Imagine the world of hurt Mignini would have been in if Rudy had been arrested with the key to Meredith’s door in his possession!

This clearly proves Mignini had Rudy Guede identified before the release of information with the omission that a brass key was missing from the crime scene.

One could now speculate that Rudy was able to lock the door from the inside to keep Meredith from escaping.  There was blood on the inside handle, but Rudy obviously used his shirt or something to cover the outside handle when leaving (no blood or finger prints).

This evidence alone against Prosecutor Mignini should be enough to end his career.

I said this was short, but it’s good information for Amanda’s defense team.

Here are all the photos from Injustice in Perugia (at bottom of pictures):