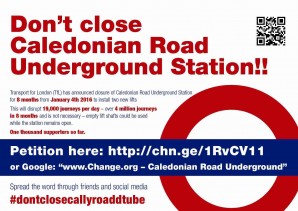 Caledonian Road Station, a popular tube stop on London’s Piccadilly Line, one along from King’s Cross, is to be closed for eight months from January 4th 2016, because Transport for London (TfL) claims that there is no alternative.  The station has two ageing, thirty-year-old lifts (elevators) and they cannot be replaced separately while the station remains open.

This explanation is true, as far as it goes, but the station has four lift shafts, so it would be possible to build lifts in the empty shafts while the station remains open.  TfL claims that this option is not possible because it does not satisfy its ‘business case’.  This is because TfL is not planning for the future and because it has failed to cost the time and inconvenience that four million disrupted journeys will mean for thousands of passengers.

This is how it goes

TfL claims that at peak times, two lifts can cope with twice the current passenger traffic at the station.

This argument has two flaws:

1. Lifts break down, so if only one lift is working, the station is already operating at 100% capacity at peak times.

2. Usage is rising. Eight years ago the station catered for 5.3 million journeys a year. Now it is up to 6 million and continues to rise.

Future demand and safety concerns will mean that the station will soon need at least three lifts. Why not do the extra work now?

A TfL engineer estimated that bringing the two old lift shafts back into service would cost about £5 million.

What about the passengers’ extra costs?

The cost of extra bus journeys for the station’s regular users for eight months will be over £4 million, but TfL has said that this cost will be refunded to those users through their Oyster (travel) cards and they won’t lose out – though there will still be a significant cost incurred by TfL because extra buses and drivers will be needed.

But there is another cost that TfL is ignoring – the extra time that all the journeys will take for the travellers. When a business case is made for a new motorway or railway, this time is costed and used to justify the project. The time lost by the station’s regular users for eight months can also be costed. This is what I have done.

The station caters for 18,000 journeys per day, roughly 9,000 return journeys. While the station is closed, each person will spend around 15 minutes extra time travelling each way, that’s half an hour a day or 2.5 hours in a five day working week. (I have ignored weekends).

In conclusion, Caledonian Road Station’s travellers are being forced to waste over £6 million of their own time so that Transport for London can avoid fitting extra lifts and save £5 million from its budget.

Cost and inconvenience to passengers does not matter to TfL

So we are losing our own time/money for eight months without compensation and we will end up with a station that has no increased capacity and which will probably still need an extra lift in a few years time.

You can bet that the transport economists who worked on the case for building Crossrail 1 and 2 and the High Speed Railway to Birmingham are costing the time saved by travellers at more than £7.85 per hour and that their calculations are crucial to the business case for those projects. Perhaps one of them would like to check my figures.

My message to TfL is this:

Why not bite the bullet and fit the extra lifts now?  The business case for doing this seems clear to me.

And one more thing – Caledonian Road Station is one of the few completely accessible stations on the Piccadilly Line and just around the corner is the head office of one of the UK’s leading disability charities – Scope.  Many disabled people live near the station.  TfL did not know this and did not consult the local council or the public before making its plans.