David Camm’s Acquittal And Reflections On The Trial

Those of us who advocate for the wrongfully convicted are used to disappointments – unfair rulings, biased judges, biased media sources, corrupt prosecutors, corrupt police and on and on. There are so many things that contribute to wrongful convictions and the fight to right this wrong is difficult with far too many obstacles along the way. Every once in a while we receive some good news – a successful appeal ruling, a new trial or the ultimate goal – an exoneration for the people we know to be innocent. That rare “win” occurred last week in Indiana. David Camm was finally acquitted. Wrongfully accused of the murder of his wife and two children thirteen long years ago, it’s been a tough fight to freedom with many twists along the way but in the end truth and justice prevailed.

I came across this case about two years ago and was drawn to it after reading the case history. It was obvious that the State of Indiana had a very weak case against Camm and he had a solid alibi that could not be dismissed no matter how hard the State tried to minimize it.  What began as a weak case (questionable blood drops on a t-shirt) would continue to weaken over time to the point where there was nothing left to the State’s case.  Their theory fell apart the minute that Boney was identified, yet they pushed on.  Over time, more evidence would surface – DNA placing Boney in contact with the victims – yet they pushed on with their prosecution of Camm.  This was shocking to all who have taken the time to research this case.

Though I was unable to watch any of this third trial, I did follow it closely. I would like to summarize some of my thoughts on the trial before I move onto other cases. I must admit that I’m still shocked at this huge win because they are so rare these days with the way our “justice” system is structured. It has given me a renewed incentive to fight for other innocent people who still remain in prison.

I can summarize the defense case by saying that they did an outstanding job, very impressive. They covered all bases, introduced new “touch” DNA evidence that was very compelling and did an excellent job cross examining all of the State witnesses. They also had very competent experts who did a great job refuting the State’s expert’s testimony. Having said that, they were also placed in a difficult position with some of the judge’s rulings. More about that later.

I want to highlight the things that I found to be unfair in this trial because as long as this continues and people are barred from receiving fair trials, innocent people will continue to be wrongfully convicted of crimes. Once that happens, it is a very difficult feat to overturn it and then to win an acquittal or hope to be exonerated with new evidence.

1) The way that the State dealt with the touch DNA evidence: This type of DNA evidence – from skin cells left at the scene has been around for a while and has been widely accepted in courts across the country. This wasn’t anything new. Yes, it’s true that contamination can occur but Boney’s full DNA profile was found under Kim’s nail and there was strong DNA evidence – Kim’s DNA on the sleeve of the sweatshirt – an indication of a struggle. I believe the strongest DNA was found on Kim’s sweater – Boney’s DNA.
Note: The prosecution is supposed to be the seeker of fact and truth. They are the ones who should have been introducing this evidence when they prosecuted Boney in ’06; instead they never bothered to test the items for touch DNA. They wouldn’t because they decided to build a case with Boney as a patsy – merely selling a gun, wrong place at the wrong time – ridiculous. So in this trial they attempted to discredit the evidence and failed.

2) Jailhouse snitch: The only thing I learned from this witness was that he received State favors in exchange for his testimony.
Note: This is improper and unethical

3) Boney was the State’s star witness:  Just think about this for a minute – the simple fact that they were so desperate to win that even as their case crumbled over time, they refused to let go – even going to the point of having a lying murderer as a Star witness.
Timeline problem – The most important take away from Boney was that he testified that he arrived at the Camm’s at 7PM, Dave arrived shortly after that, he handed him the .380 Lorcin, Kim pulled into the garage, shootings occurred. The problem is – Neither Kim or Dave were home at that time. Kim was at the pool until 7:10 and it’s a 25 minute drive home; Dave was just arriving at the gym at 7PM.
Note: The prosecutor lied in closing arguments and stated that Boney testified that he arrived at the home at 7:30PM. This is improper and unethical.

I would also like to briefly summarize the problems with all three prosecutors in this case – back to the beginning of the case and what occurred with each one of them. None of them were willing to objectively examine the evidence and admit they were wrong about Camm. This case is a great example of the “win at all cost” mentality of today’s prosecutors who are rewarded for winning convictions.

1) He disallowed all testimony about prosecutorial misconduct – This was important because it showed that the very early investigation was flawed and had it be done properly the sweatshirt that they considered an “artifact” would have led them directly and immediately to Charles Boney – they would have noticed the similar crime pattern – investigated his car and home – likely found evidence – checked for fingerprints inside Camm home – likely even more evidence – end of story – prosecute him for the murders. Camm is free to grieve for the loss of his family.

Key evidence of prosecutorial misconduct that should have been allowed –

a) Mike McDaniels – Camm’s first defense attorney testified outside the jury’s presence that Stan Faith (first prosecutor) said he ran the DNA profile though CODIS and there was no match, way back in 2001. This is evidence that he intentionally withheld exculpatory evidence that would have led to Boney. Boney’s DNA was in CODIS since ’97.

b) Two state witnesses testified in the second trial about Stan Faith’s attempts to coerce them into committing perjury by stating that the evidence implicated Camm when it did not. Dartt didn’t allow any questioning about it in this trial.

2) Specifics of Boney’s past crimes: Dartt refused to allow any evidence of Boney’s foot and shoe fetish in the trial even though it was completely consistent with evidence at the scene – Kim’s shoes placed carefully on top of the Bronco, socks missing and never found, feet badly bruised. The jury should have heard this.

3) Aiding and Abetting Instruction: Judge Dartt added this to the jury instructions – allowing them to convict Camm of murder if they believed he “had something to do with it” even though the State never once asserted that he assisted Boney in the murder. This was a blanket, a catch-all for jurors who weren’t convinced of Camm’s guilt based on evidence but nonetheless were permitted to convict based on a “feeling” he was involved. This was wrong and certainly would have been a strong point of appeal had Camm been convicted.

Of course there is much more to this case but for my own closure I wanted to summarize my thoughts about everything looking back. I believe this case can be used as an example for law students who wish to study wrongful convictions. It had many of the elements that are typically found in wrongful conviction cases. 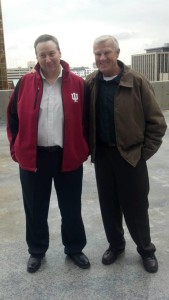 I believe that as more people become aware of wrongful convictions and how they occur, there will be less ability for prosecutors to use these tactics to convict innocent people. At least that is my hope. I am pleased that the jurors in the Camm case were able to see the truth about this case. Finally, there is justice – Camm is free – but there should be consequences for all who participated in this wrongful conviction. Much suffering could have been avoided. Until prosecutors are held accountable for their actions, this will continue.

I hope David Camm can find peace, that he can heal and have a happy, productive life now that he is finally free.