Fight To Free Jamie Snow Continues On After Recent Setback

This article was originally published in the Injustice Anywhere 2018 Spring Newsletter.

Jamie Snow’s federal habeas petition was recently denied. It was a horrible ruling which was nothing more than a regurgitation of the trial decision. Once again, the court failed to address the merits of the case. All new evidence was once again ignored. In 18 years, Jamie has only had one trial. No evidentiary hearing – no new trial. Just appeal, after appeal, after appeal, building on new evidence that the courts refuse to consider.

Jamie was wrongfully convicted in 2001 for the 1991 murder of William Little, a gas station attendant in Bloomington, Illinois. Jamie is currently serving a life sentence without the possibility of parole in Stateville prison in Joliet, Illinois. Jamie has proclaimed his innocence from day one. In the years following his conviction, new information has come to light clearly showing that Jamie is an innocent man. To date, the courts have willingly ignored this information.

Jamie’s attorney, Tara Thompson, did a great job arguing in front of very conservative federal judges in October of 2017. Unfortunately, Jamie had a bad draw when it comes to the panel of judges who heard his case. The recent decision was a disappointment, but Jamie and his supporters will never stop the fight, regardless of any setbacks. We will keep moving forward. We continue to uncover new evidence, and this will be the year that we are going public with every bit of it. It’s time for the public to hear the truth about everyone involved in this injustice. More news on that coming soon.

Why is the state afraid to release the case files?

Jamie continues to fight for DNA testing. The state has resisted every step of the way.  Most recently, the state has been fighting a motion for discovery. Because we were unconvinced the state has turned all of the relevant documents over, Jamie’s attorney’s asked that we be granted the entire case file. The state vigorously opposed this, and due to the state’s opposition, the judge ultimately ruled that attorney’s from the Exoneration Project must go to McLean County and review the thousands of documents in person. However, they could not make any copies of documents, and could not take any pictures of documents.

During that review session, attorneys from the Exoneration Project discovered relevant documents that had not been disclosed. Hence, the issue was brought up again in the last court status meeting, and when attorney’s again, asked the judge to grant discovery – the state again opposed it. This resulted in the judge telling the attorney’s once again that they must go to McLean County and review the thousands of documents under the watchful eye of the state’s attorney, without allowing them to make copies or take photos of the documents

The DNA motion has been before the courts for five years. This is absurd. Anyone who follows this case should be outraged to see the state working so hard to block the defense from obtaining discovery for the case. What does the state have to hide? If they are truly convinced that they convicted the right person, why are they so worried about releasing case files to the defense?

Freedom of Information Act (FOIA) lawsuit filed against the City of Bloomington, Illinois.

In March 2017, myself and my colleague, Ray Wilson, filed a FOIA lawsuit against the City of Bloomington because they have not properly responded to our FOIA requests. After a year of wrangling, we have come to an impasse, and the state has refused to produce requested documentation. The state has now filed a motion to dismiss our case against them. We are in the process of preparing a response to their ridiculous request.

We find it quite telling that the state has sent us everything except the specific critical items we have requested, of which we have proof that they have in their possession. Why are they afraid to release those files? We are going to fight the state every step of the way. Residents of McLean County should be very concerned to see their states attorney’s office attempting to suppress evidence. It is time for people to demand better from their elected officials.

Please visit Jamie Snow’s Facebook Page and FreeJamieSnow.com to keep up to date with current events.

While an innocent man remains in prison, there is DNA evidence from the case that has gone untested. For nearly 8 years, the McLean County State’s Attorney’s Office has fought DNA testing in this case. The University of Chicago’s Exoneration Project has agreed to pay for all the DNA testing at no cost to McLean County taxpayers, but the State Attorney still refuses.

Allow the Exoneration Project to pay for it, save the tax payer dollars, and let’s put an end to the cloud of doubt surrounding this case. If this crime had occurred today, there is no doubt the state would test every single piece of physical evidence collected from the crime scene.

To date, there have been 337 post-conviction DNA exonerations in the United States – and Illinois has one of the highest DNA exoneration rates in the nation. Yet McLean County continues to show a pattern of opposing DNA testing. Many of these cases were prosecuted under the same State Attorneys Office as Jamie Snow’s case and resulted in questionable convictions. It’s time to test the DNA. Join the fight! Add your signature today! 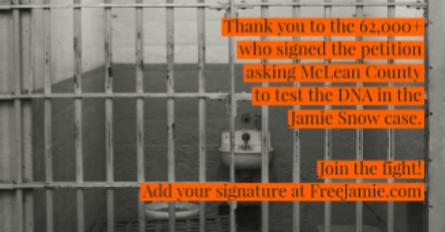