Home » Death Penalty » Former Diplomat and Founder of Oldest Penpal Organisation in Europe pleads to the Commission on Offender Review in Florida: PLEASE spare the life of my friend Michael Lambrix

Former Diplomat and Founder of Oldest Penpal Organisation in Europe pleads to the Commission on Offender Review in Florida: PLEASE spare the life of my friend Michael Lambrix 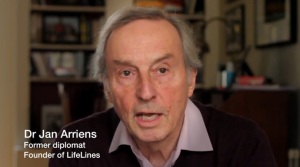 Jan Arriens, a former diplomat and founder of LifeLines, the oldest penpal organisation in Europe, addresses the Commission on Offender Review in Florida with a video plea asking to spare the life of his friend Michael Lambrix, on death row in Florida. It is filed by the clemency counsel representing Michael Lambrix.

Jan Arriens started writing to Michael Lambrix 23 years ago, shortly after having founded LifeLines, a non campaigning, non political organisation, which purpose is to provide support through letter writing to prisoners on death row in the USA. According to him, the Departments Of Corrections throughout the USA often mention how such activity helps make prisoners become better human beings and easier to deal with. In Jan Arriens’ words: “It extends their humanity”.

Today, Jan Arriens as well as Mike’s family and his small community of pen friends around the world are extremely worried that the State of Florida may decide to proceed with the execution and they hope that the Commission on Offender Review will give Michael Lambrix a favourable recommendation.

They all believe he is innocent of capital murder.

He says: “We would be all deeply shocked and devastated if this would proceed to execution. I know that Mike has had clemency reviews, but that has been a long time in the past, a lot of happened since then and if you are going to proceed towards execution, I feel that all possible avenues must be explored (…). I feel the case has never been looked at as an integrated whole”.

At his first trial, the Glades County jury ended with the declaration of a mistrial on December 17, 1983, when the jury failed to reach a verdict after deliberating for 11 hours. The retrial jury found M. Lambrix on both counts of indictment on February 24, 1984.  The first clemency review took place in 1987. At the time, Michael Lambrix was facing execution with the electric chair. Facing an imminent execution transformed him as a man, and he feels he has already met with death.

Michael Lambrix wrote:  “I had reached the point of accepting death, at a depth of of the inner self that simply cannot be described. It’s like something inside just lets go. And it was that “virtual reality” death. (…) There is no experience more intense than death and it’s that experience more than anything else that tells me there really is a God”.

Jan Arriens says: “He is an intelligent, sensitive, may I say decent person and I would be devastated if he were executed. To me, he has become something like a brother (…). So my appeal to the board is: Please recognize that and do not proceed to execution”.

Clemency counsel, Adam Tebrugge, says: “I am hopeful that there will be a new investigation into the Michael Lambrix case. His court hearings have been plagued by repeated errors and he has never received a full and fair judicial review. People from all over the world have been writing to me to emphasize that Mike’s life has value and to plead against his execution. I am optimistic that Michael Lambrix might be the first person to receive clemency in Florida in over thirty years.”