Inconsistencies and Key Facts in the David Thorne Case

The David Thorne case has many of the classic tell tale signs of a wrongful conviction – tunnel vision, poor evidence collection at crime scene, poor defense representation, coerced witnesses and lies. A lie can be so powerful in a criminal case. Evidenced by the many convictions overturned in recent years, we now know that many of them were built solely on lies. It typically takes new physical evidence to finally bring the truth to light. The problem with some cases is that when the investigations are so poorly handled such as the Thorne case, it is difficult to find that new information that can help free the wrongfully convicted – but we must keep searching. We do this because we know the State’s case doesn’t hold up. We know there must be something or someone that can help the person and we must continue to try. Though an excellent website already exists, I would like to highlight some of the major problems with the case that I recently observed while reviewing all of the files once again. These things demonstrate how unlikely it is that either Joe Wilkes or David Thorne had anything to do with this horrible crime and why we must keep searching for a way to free these men.

For those new to this case, Yvonne Layne was found murdered in her home on April 1,1999. She was found with her throat slit in a pool of blood in the center of an oddly staged crime scene with furniture items carefully placed on and near the body. A photo of an unknown baby girl was found on the floor between her legs as was an overturned potted plant. The staging is indicative of a personal crime as it’s unlikely that a random person would take the time to stage the scene. Also, though 3 of her children were locked in upstairs bedrooms, a 4th child (age 4) was found walking freely in the home and he was clean and dressed and wearing shoes that were tied. The child was unable to dress himself and certainly couldn’t tie his own shoes. The fact that a child was somehow kept away from his mother’s blood for so many hours and was clean and dressed indicates that someone cared for him. Certainly only someone close to him would take the time to ensure that he was clean. Police believe that the murder took place the night of 3/31. If that’s true, this child would have been alone with his mother’s body for potentially as long as 17 1/2 hours and certainly should have had blood on him. Someone ensured that he either remained clean or was cleaned up and dressed before police arrived. When studying this case however, it is clear that those closest to the victim were never investigated. The police made up their minds right away that David Thorne was responsible.

Why did police focus on Thorne?

Thorne agreed to speak to police the day after Yvonne was found. Unbenownst to Thorne, his grandfather had arranged for an attorney to send a letter to police requesting immunity in order for Thorne to speak to them. Police were unable to ask Thorne any questions and they felt that Thorne was hiding something by sending the immunity letter. David Thorne knew nothing about this letter! Had he known, he would have never agreed to it. He would have answered questions and it’s very likely that he would have never been pursued as a suspect and certainly wouldn’t have been convicted.  Here is testimony from the lead investigator at a preliminary hearing about the phone call and discussion about the requested immunity from David’s grandfather’s attorney.

How did they build a case against Thorne?

Joseph Wilkes: The State’s theory is that Joseph Wilkes murdered Yvonne in a murder for hire scheme – that David Thorne paid him a sum of $300 to kill her. Investigators had custody of Wilkes for 20 short minutes and in that time they received a confession. That 20 minute interview was not recorded. 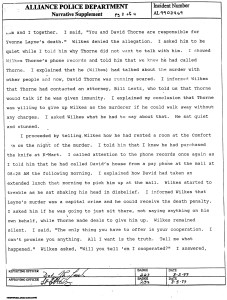 Once police understood that Thorne couldn’t have murdered Yvonne because he was in another town taking a class that night, they looked closely at all of his associates. There is a police record of an incident in which a car windshield was broken. Joe apparently blamed David for the broken windshield, David accepted responsibility for it even though he said that Joe broke it. I believe this is how police set out to frame Joseph Wilkes. He knew David Thorne, he was young and he was easy to manipulate.

Rose Mohr and Chris Campbell both stated that they saw Joe the night of 3/31 at the Carnation Mall food court in Alliance. That places Joe in the same town as Yvonne Layne – he was staying with the Enoch family 20 miles away at the time. Rose came into this case when she allegedly told her mother that she had information about that night. .The story goes that her mother told the apartment manager who then contacted the police. Police first contacted Rose’s mother and then Rose. I believe that the statements from Chris and Rose enabled police to frame Joe. In any case, lies and inconsistencies are flags – an indication that it can’t be trusted, an indication that it was probably manufactured. This case is filled with lies and inconsistencies, beginning with Rose and Chris and in turn the entire case against Joe.

Because of so many inconsistencies, I find it difficult to trust anything coming from Chris and Rose. Were they coerced? Chris Campbell was arrested on a drug charge a few days after his July police interview and held in jail for 6 months – until after he testified at Thorne’s trial. I think it’s very possible that the entire story is fabricated and they never actually saw Joe Wilkes that night.

There is much, much more to this story and many more inconsistencies. Of course, probably the biggest issue with the State’s case is that it couldn’t possibly have happened the way Joe described it. See Brent Turvey’s report. I think it’s important to point out all of the other smaller issues with the case because they all add up to a case that clearly remains unsolved. We will continue working on this until the case is solved and these men are freed. If you have any information that could be helpful, please send an email to lynne0312@yahoo.com.