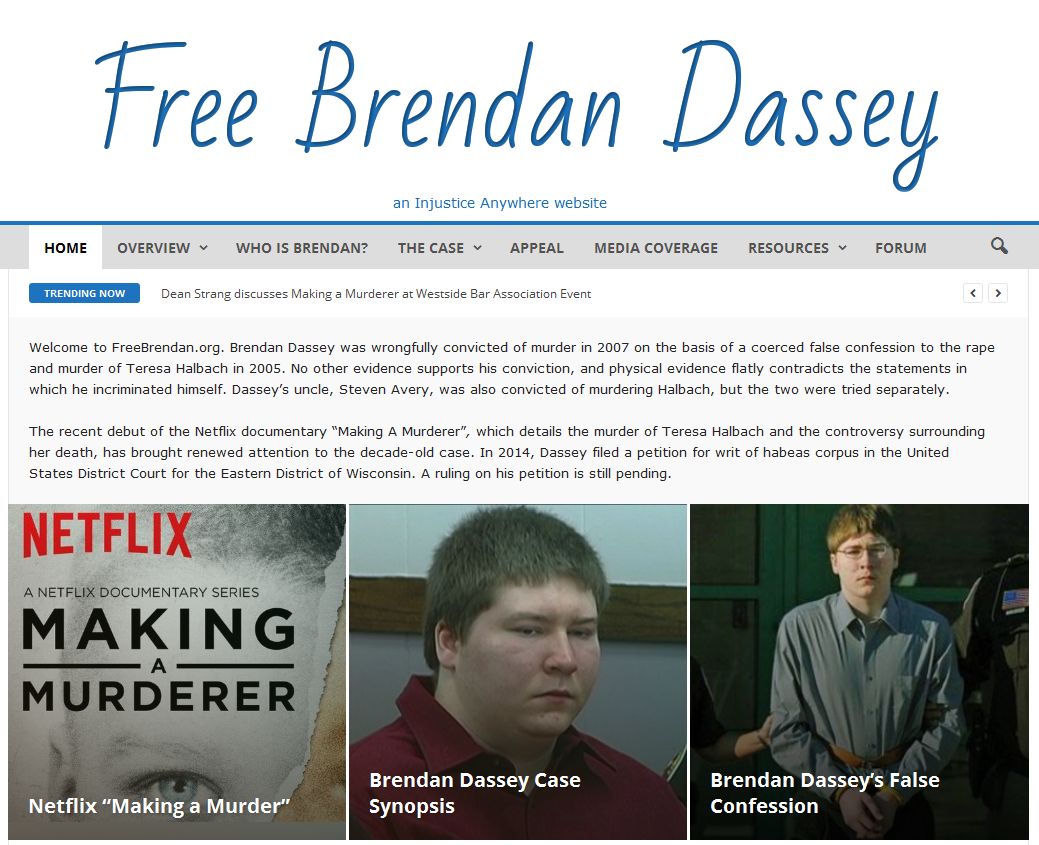 Injustice Anywhere, an all-volunteer organization working to bring more attention to wrongful convictions, has launched a new website in support of Brendan Dassey. The site can be found at Freebrendan.org.  The group announced their support for Dassey in January, after reviewing Dassey’s interrogation videos. Injustice Anywhere feels strongly that Dassey was mistreated by his interrogators, and that any information obtained during his interrogation should be deemed unreliable.

Dassey was convicted in Wisconsin on March 17, 2007, of first-degree intentional homicide, mutilation of a corpse, and first-degree sexual assault. Dassey was sentenced to life in prison, with a chance for early release in 2048. The victim was 25-year-old Teresa Halbach. Dassey’s uncle, Steven Avery, was also convicted of murdering Halbach, but the two were tried separately. Avery, who was already proven to have been wrongfully convicted in a prior case in the same county after serving 18 years as an innocent man, has denied any involvement in the Halbach murder. Avery’s supporters argue that the same police force who wronged him the first time, set out to frame him once again in an attempt to avoid paying out millions of dollars to settle a civil suit resulting from his wrongful conviction.

During their murder investigation, police questioned Dassey, then a 16-year-old high school student, looking to find information on Avery, the lead suspect in their case. Interrogation recordings show that Dassey was coerced into making false statements which were then used against him to secure his conviction. The recent debut of the Netflix documentary Making A Murderer, which details the murder of Teresa Halbach and the controversy surrounding her death, has brought renewed attention to the decade-old case. The series has left many wondering if Steven Avery and Brendan Dassey had anything at all to do with the crimes they are charged with.

Injustice Anywhere, a group which I help operate, has reviewed the Brendan Dassey case and has determined it to be a clear cut case of wrongful conviction. Dassey’s interrogation recordings provide a casebook example of a coerced confession. Sadly, Dassey was horribly mistreated by his public defender as well. Dassey did not receive a proper defense, instead he was coached by his attorney to say he was guilty. The attorney even had his own investigator instruct Dassey on how to draw images of the crime scene which would  support the prosecution’s arguments. Dassey is seen acting clearly confused during the recorded session, which irritates the investigator, prompting him to give orders to Dassey telling him exactly what he needs to draw, providing all of the necessary details along the way.

There is no evidence against Dassey, beyond his statements to police. He was interrogated at 16-years-old without an attorney present, and he had ineffective counsel, making it it impossible for him to receive a fair trial. At the very least, Dassey deserves a new trial.

You can also join the discussion on the Injustice Anywhere Forum: Brendan Dassey Case (“Making a Murderer”)