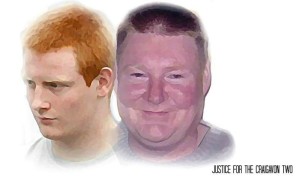 Defense teams for the Craigavon Two were in the appeal court today to seek disclosure of surveillance material relating to the harassment by the PSNI of a key defense witness for the upcoming appeal.The close family member of Witness M, the key prosecution witness, came forward and gave a sworn affidavit destroying Witness M and his credibility.

The Close family member was visited at his home by the PSNI who he says forced their way in and threatened him to withdraw his sworn testimony, the family member refused to bow to the pressure and the following day was arrested and held for two days in Dungannon PSNI Station where he says he was pressured into withdrawing his testimony.

When this was revealed on the 29th of April on the first day of Brendan McConville and John Paul Wootton’s appeal it was revealed that a covert surveillance operation had been directed against the new witness and the legal teams, this led to the adjournment of the appeal until October.It came to light as part of the arrest of the new witness that his house had been bugged for a considerable period of time and that these audio recordings had been transcripted, yet today the prosecution claimed in court that their was no audio available for the day when the new witness claims he was harassed and threatened by the PSNI.

Lawyers for Brendan and John Paul also claimed authorisation for a police surveillance operation was improperly obtained in a bid to sabotage attempts to overturn their convictions.

The allegations were made during applications for the disclosure of more material before appeal hearings get underway next month.

Particular questions were raised over why no material was available from the day in April when officers called to speak to the new witness.

“The relevance is to show the demeanour of (the man). He was not a man under pressure,” the defence lawyer explained.

But prosecution counsel insisted that there was no further material available.

Lord Chief Justice Sir Declan Morgan, sitting with Lord Justices Higgins and Coghlin, suggested it may be surprising that no recordings were carried out on the day police went to the house.

The prosecution said: “For the rather prosaic reason … there was no other audio sought that day.”

Dealing with the defence applications, Sir Declan said the issues surrounding surveillance authorisation under the Regulation of Investigatory Powers Act (RIPA) would be kept under review.

He added: “We are not prepared at this stage to order disclosure in relation to the remaining matters sought in light of prosecution indications given to us.”

The Justice for the Craigavon Two group calls for an immediate end to the threat and harassment of the defense witness and the full disclosure of the covert material held by the PSNI we also call for an end to the sinister targeting and surveillance of defense lawyers who must be free to do their work unimpeded and without fear for their safety.

Brendan and John Paul’s appeal opens again on the 8th of October we ask everyone to watch closely the appeal process and help overturn this serious miscarriage of justice.It is Brendan and John Paul today, based on the tactics and shocking lack of evidence in this case it could be you Tomorrow!!!