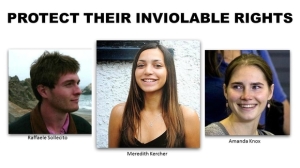 Amanda Knox Injustice in Perugia Meredith Kercher Raffaele Sollecito 2014-12-09
Wrongful Conviction News Reporter
Share
Previous Petition launched calling for investigation into the mishandling of the Meredith Kercher murder case by the authorities
Next Former Diplomat and Founder of Oldest Penpal Organisation in Europe pleads to the Commission on Offender Review in Florida: PLEASE spare the life of my friend Michael Lambrix