Free Adam Braseel… he is Innocent!

Please read and share… support “TEAM ADAM” help bring justice to this Innocent Young Man, who is sentenced to life in prison for crimes he did not commit… 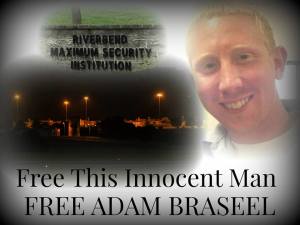 Adam is a VICTIM of our highly flawed judicial system, involving prosecutorial, and police misconduct.  “There was no DNA to link Adam to either crime, he had no motive, nor did he have the capability to commit these crimes.  His conviction was based “solely” on tainted and suggestive testimonies of two questionable eyewitnesses, whose credibility was never investigated.  There are countless discrepancies in this case, along with facts to support issues such as: withholding evidence, tampering of evidence, missing evidence, leading a witness, permissibly suggestive lineup, incorrect identity, incorrect car identification, failure to pursue third party liability, failure to object by trial counsel, failure to investigate, failure to introduce expert testimony, failure to negotiate, failure to preserve evidence, failure to obtain video surveillance, Illegal distribution of exhibits, Illegally obtained statement, and ACTUAL INNOCENCE!

This travesty cannot be overlooked or ignored!  Please help save the life of this Innocent Man!  We welcome any questions you may have in this case, along with welcoming any investigative work of your own.  There are many unanswered questions in this case, starting with the anonymous tip called in to the Sheriff’s Dept. giving Adam’s name.  Why were we never given any information about the tip?  Why was Adam targeted, who had what to gain?  Why were they looking for Adam before he was identified?  Why did the Sheriff and Chief Deputy say, they did not think Adam was large enough in size, to have committed the murder, but did not search for or actively investigate any of the other suspects in this case?  Why and how could Adam’s conviction be determined on the two eyewitness testimonies, Becky Hill and Kirk Braden (sister and nephew) of Malcolm Burrows (murdered victim), living with Malcolm at the time, “Malcolm a well-known drug dealer”?  Why was there “No Blood or DNA” found linking Adam to either crime scenes?  Surrendering the clothes and cap, he was identified as to wearing, by Becky (the assaulted victim), and along with his car and all its contents.

Some interesting facts to think about, during the investigation, the Sheriff’s department refused to take affidavits from witnesses, and failed to secure video evidence that placed Adam at a different location during the time the crimes were committed.  The actual “murder weapon”…  do we really know what it was?  Becky and Kirk’s original statement says, it was Hammer, five days later, she did not know what it was.  Preliminary, she said steel rod, during the trial, it was a tire tool, metal tool.  The opening of trial, DA said in count 3, he would prove Malcolm was beat to death with a fire extinguisher, but in closing the DA states, Malcolm and Becky, was beat with a small bat (found in a trashcan, inside Malcolm’s home)!  Kirk changes his statements, as to what happened four times.  When identifying Adam’s car, he described it “only” as a tan four door Nissan, he never mentions any damage, sunroof, until he sees the car (which was parked in visual site, outside the police station) then his whole description changes.  He never mentions in any of his statements, hitting the assailant, until he sees Adam with a small scratch on his cheek.  This occurred from an incident that had happened several days earlier, while on the job at UPS, where he was working at that time.  Becky (assaulted victim) was overheard asking for assistance to identify Adam in the courtroom.  Kirk was charged with “assaulting his own mother” a year or so after the trial.  The house (crime scene) burnt to the ground, not long after crime took place.  Who had what to gain or hide?  It would be physically impossible for Adam to have murdered this man, and attempted the murder of another, without having a trace of DNA evidence linking him to either crime.  There is no way Adam could have done this, it just does not add up!  He has several alibis to prove his where about (some never even asked to testify) he was in a completely different city with friends when the crimes took place!

“The only true facts in this case are…  Malcolm was brutally murdered, Becky was viciously assaulted and left for dead, Adam did not receive a fair trial, and my Brother Adam Braseel, DID NOT MURDER ANYONE, ASSAULT ANYONE…  ADAM DID NOT COMMIT THESE CRIMES”!  I welcome anyone to find out and give us the answers to these questions, along with all the other unanswered questions that remain!  Please… we need your help and support!

For more information about this case, to show your support, and leave comments go to our fb page Help Free Adam Braseel or www.exonerateadambraseel.com  sign the petition @ http://chn.ge/1y7z0gi Help bring Adam home where he belongs!

Thanks and God Bless!